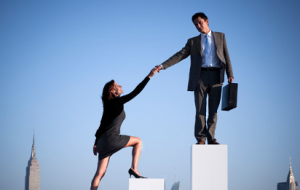 The Social Imperative for CEOS

Reputation is the public part of personality. If identity is the way a person thinks about themselves, then reputation is the ways others think about that person. We know positive reputations confer social status and brain research suggests human beings place as much weight on social status as monetary reward. Public figures have long understood that the perception of who they are is as important as reality, and surrounded themselves with experts at building reputations.

Social media is the latest weapon in the popularity contest. Commentators disagree about the value of this ‘like’ culture. On the one hand, social media popularity can endow a person with a cloak of credibility at lightning speed. But the existence of global ‘click farms’ makes it difficult to know when the star-making is bogus.

The rapid rise and fall of ‘Santiago Swallows’ is a case in point. Described as a celebrated guru and great thinker, he was outed last April as a work of fiction by his creator, Kevin Ashton. The British technology expert made Santiago up in a few hours, then used him to show how easy it is to manipulate the views of people who revere social media as a guide to finding out who matters.

Compared with the spin-doctored worlds of celebrity and politics, CEOs have let results speak for themselves. But studies show that the leader accounts for up to 14% variance in a firm’s performance. And now the power of social media to make or break reputations in other spheres is acting as a wake-up call to senior executives.

When Lord Browne exited BP at the end of 2008, he did so elegantly. The effective way he managed his reputation under heavy fire was brought into sharper focus when his successor, Tony Hayward, was vilified for his handling of the Gulf of Mexico oil spill. Unsurprisingly, CEOs are calling upon the services of discreet advisors, to help them navigate the murky territory of personal reputation.

CEOs are often counselled to project a moderate image that neutralizes distinguishing features of their style in favour of a rounded persona. This cuts down the risks of creating a cult of personality. But the human desire to dissect the inner workings of those deemed by society as ‘having it all’ is insatiable. Post-financial crisis, the public debate over salaries, bonuses and pensions, is just the tip of the iceberg in terms of the scrutiny facing CEOs.

Social media fills the gap between what successful people choose to tell us and what we really want to know about them. Our research in partnership with Soshio, who specialize in Chinese social media analytics, suggests people are curious about eminent CEOs in much the same way as celebrities (see inset below). 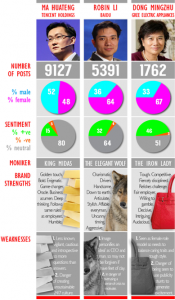 A social media savvy CEO needs to remember that reputations are self-fulfilling prophecies, so personal brands should be crafted with precision. And because of the attention they receive, there is a stronger relationship between a leader’s reputation and behavior, so CEOs must act in ways consistent with their story.

We know that in the digital age, a leader’s reputation is strongly linked to ‘second-hand’ perceptions of people remote from them, so CEOs must cast the net wide when managing their brand. And in times of change, people will use a leader’s history of behaviour to reduce their own uncertainty. So, a CEO must stay alert to what their reputation says about their attitudes to risk and the unknown.

Finally, it is a psychological truism that people weight ‘bad’ information more heavily than ‘good’ information. So, just a single instance of negative behavior needs to be balanced by at least 5 positive incidents. CEO’s should consistently apply the 5:1 rule to their conduct.