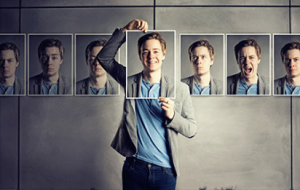 The house of personality is divided. In one corner, we have supporters of the ‘why the brains of extroverts may have the edge’ position, and in the other, we have advocates of the ‘five reasons introverts make better leaders’ argument. The debate has always simmered away, but the publication of Susan Cain’s Quiet: The Power of Introverts in 2012, opened up a veritable Pandora’s Box of disagreement between the opposing camps.

And because the human response to stalemate in the either/or stakes is often to develop a ‘best of both’ option, we have a new contender in the ring, the ambivert personality type. According to Jeffrey Cohn, a partner at Heidrick and Struggles, an ambivert “is able to effectively shuttle back and forth between the introversion and extroversion dimension with grace, speed and efficiency”.

If you are now tempted to rip up that tatty copy of the Myers Briggs inventory that indicated you were an extrovert as part of a middle-management development program years ago, hold on a second. Resist any urges to google questionnaires purporting to tell if you are an ambivert. If you find yourself muttering that this nonsense is what comes of listening to any of the following – consultants, coaches, HR – just bear with me a moment. The reason is that the introvert-extrovert issue – as insignificant as it is in the wider scheme of things – is the latest manifestation of a more powerful human desire to better understand ourselves and others.

The attempt to define human psychological traits is an ancient art. Theophrastus, in the 3rd century BC, described personalities in a similar way to our concepts of extroversion and introversion. It wasn’t long before the focus shifted to working out how personality could predict life outcomes and, from there, to how personality could be improved. One school of thought puts this development down to the excessively ruthless pragmatism of Western thinkers, an interpretation that chimes with the view of situationists who rile against the over-simplistic categorisation of human behaviour.

But those championing man’s ability to adapt have not stopped other researchers hunting for a tool that reads people’s characters as if we are fixed in stone. Aristotle spoke about human beings being singular by virtue of their capacity to grasp universals. The problem is that, somewhere down the line, this has become conflated with personality types. The neuroscientist, Baroness Susan Greenfield, said: “The whole point of being a human being is that we’re unique….not that you’re a plus on one feature and a minus on the other.”

City commentator, Anthony Hilton, made a criticism of economic forecasting models that also happens to be a perfect denunciation of the over-reliance on personality tests. Hilton wrote: “The only way you can get anywhere at all is devise models which assume all the difficult bits don’t exist. Then the model becomes predictable and they – the economists – can play with it on their computers and make forecasts. But economics in this stylised world is as far from reality as Grand Theft Auto – and a lot less fun.” In other words, the models – whether economic, or psychological – rely on over-simplification to function.

So why does this matter? Well, if your work depends on getting the best out of others, there is a good chance you will need to develop as a leader. Many senior executives engage specialists to guide self-development. A plethora of professionals offer such services, but finding good advisors who advance your thinking is hit and miss. Too often, the conversation about what is possible depends on the advisor’s portfolio of options. Those affiliated to consultancy houses are bound to sell certain products. Those with professional qualifications are wedded to theoretical models they are trained to apply.

To get a decent return on investment, senior leaders need to use their own frames of reference in appraising different approaches to leadership to find the best fit. This is not easy. Not only does it take time and effort for introspection, but it requires a sophisticated sense of self. And this brings us back to the limitations of personality tests, which are descriptions of artificially demarcated traits. They do not provide people with rich explanatory understanding of themselves.

Academics have long argued over the dangers of studying human behaviour using experimental techniques. Psychologist Rae Carlson’s famous question “where is the person in personality?” is as relevant today as it was when she posed it in the 1970s. Even Gordon Allport, one of the founders of personality psychology, hoped broader views of the person were possible.

There are no neat ways to unlock the ‘truth’ about people. Mechanistically slicing and dicing human behaviour without due consideration of the wider system in which folk operate is too reductionist. More than 20 years of working as a clinical and business psychologist has convinced me that leaders who want to fully express themselves have to ask themselves more difficult questions about their lives in-the-round. These include questions about identity, such as: Who am I? What is my Future? How shall I live my Life? Such questions have loomed large for human beings since time immemorial and senior executives are not immune to the same preoccupations.

There is not one successful person I have worked with who hasn’t admitted to a growing restlessness about how things have turned out. It is uncanny how often this comes at a high point in their careers between the ages of 45 and 55. What the layman sees as signs of a mid-life crisis, developmental theorists refer to as the ‘middle adulthood’ life stage. The key psychological challenge during this period is to integrate the psyche. This is when the individual needs to connect up the various split versions of the persona. The aim is to find cohesion between who they are as husband, or wives, who they are as parents and who they are as managers. It is no wonder narrowly defined personality constructs cease to feel relevant to these much bigger conversations.

So, unless you are a junior/middle manager wanting a quick-fix tool for creating team awareness, I suggest you steer clear of any approach that puts people’s behaviour into boxes. Personality tests that tell you if you are an introvert, extrovert or ambivert, or blue or red, or a plant or shaper for that matter, are only a form of short-hand. Useful as any psychometric instrument may be during the early parts of a career, there is no substitute for honest self-inquiry in the senior ranks. At the end of her book, Susan Cain talks about how we are all novelists, in that we are always writing and re-writing our own life story. It is incumbent on those who have made it to the top ranks to constantly challenge themselves about whether their story is an authentic expression of the person they were meant to become. And there is no personality test that can help you do that.